From XastirWiki
Jump to: navigation, search

Three Xastir developers are active SAR members, two others are involved in other emergency organizations. Some of our more advanced users are SAR and/or RACES members. 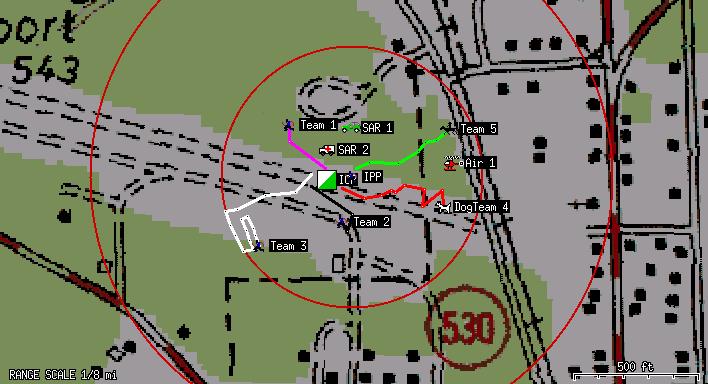 The Xastir APRS Client is a FREE! software program that will run on several different operating systems, including Linux and Windows. Amateur Radio operators trained in the use of Xastir run the program which is attached to two-way amateur radio and TNC (radio modem). The Xastir software program is backed by active developer and user communities. To increase your knowledge base and to keep abreast of the latest developments, it is recommended that you join the Xastir mailing list (Link is available from the Xastir Home Page).

The Xastir program is capable of using various types of maps that can be tailored to specific SAR operations. With APRS trackers in the field, it is possible to show which areas have been searched and to have each tracker's trail shown on the display. All that has to be decided before-hand is which maps fit the specific needs of SAR.

What follows are some examples of what is possible in various maps, as well as screenshots and descriptions of other SAR-related features.

"callsign-ssid=tactical call that is really long"

To de-assign a tactical call send this: "callsign-ssid="

To send multiple tactical calls to others, send this: "CALL1=TAC1;CALL2=TAC2;CALL3=TAC3"

Note that '=' and ';' characters cannot be in the TAC callsign. 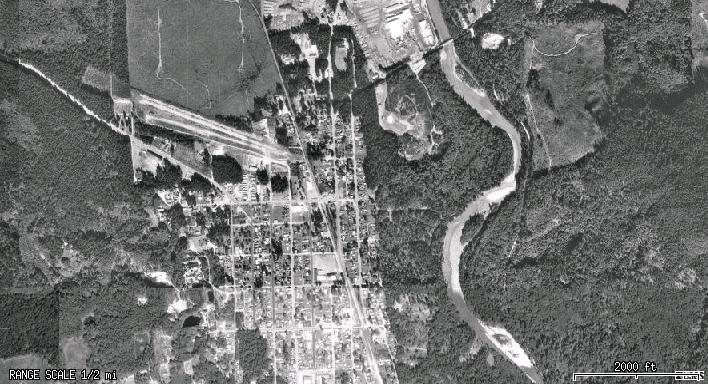 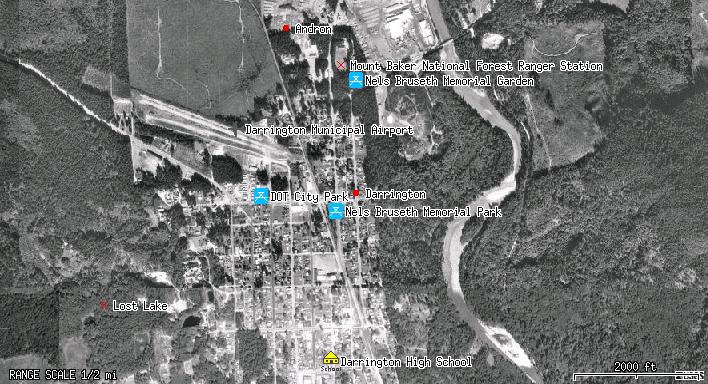 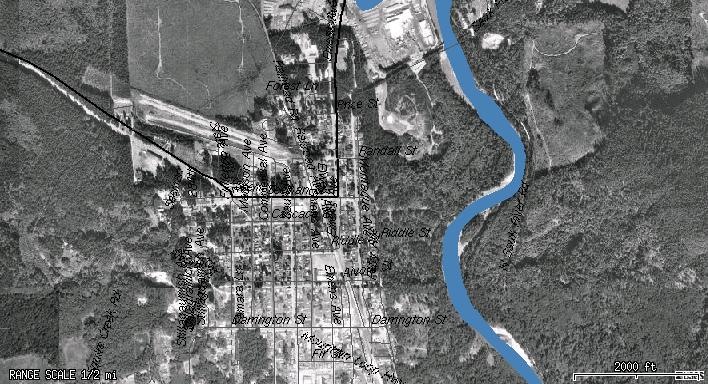 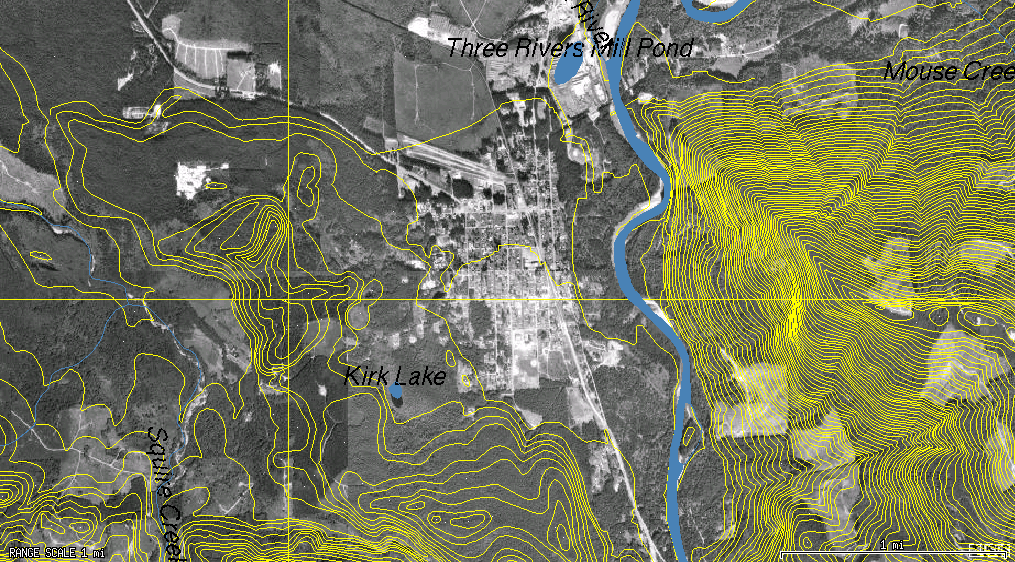 Some people have reported success using DOQQ satellite images. You may also use generic images if you have an associated .geo file defined for them (so that Xastir knows how to georeference them). Other maps may then be drawn on top of the image. 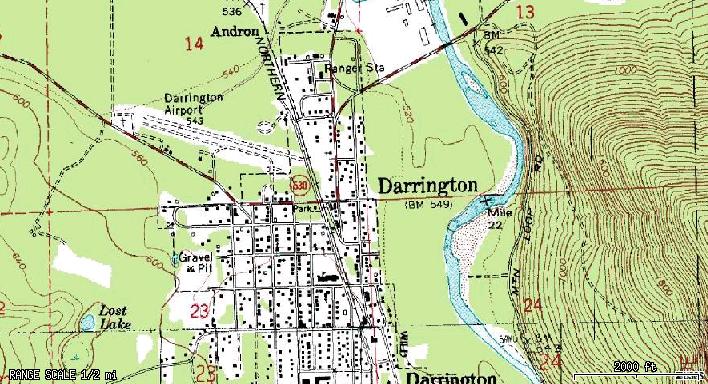 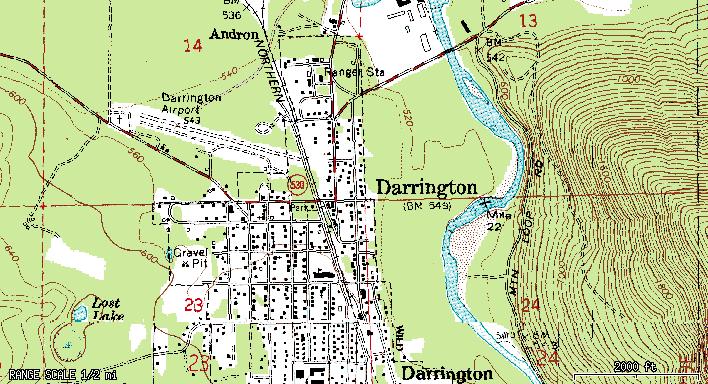 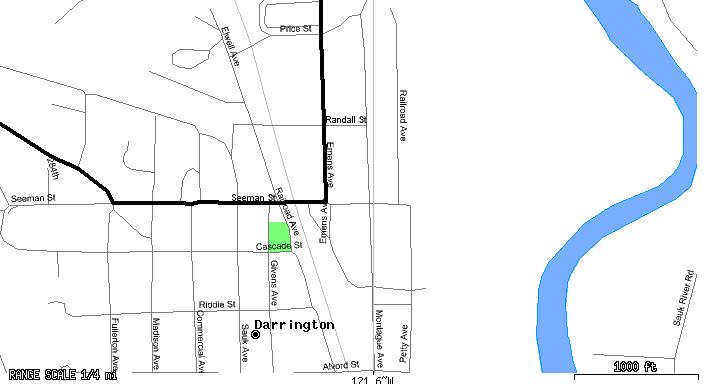 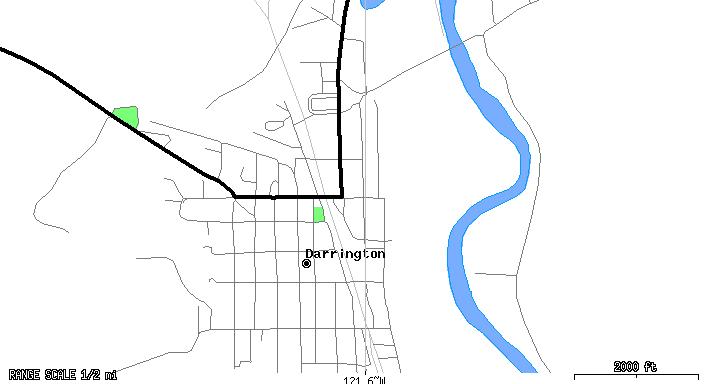 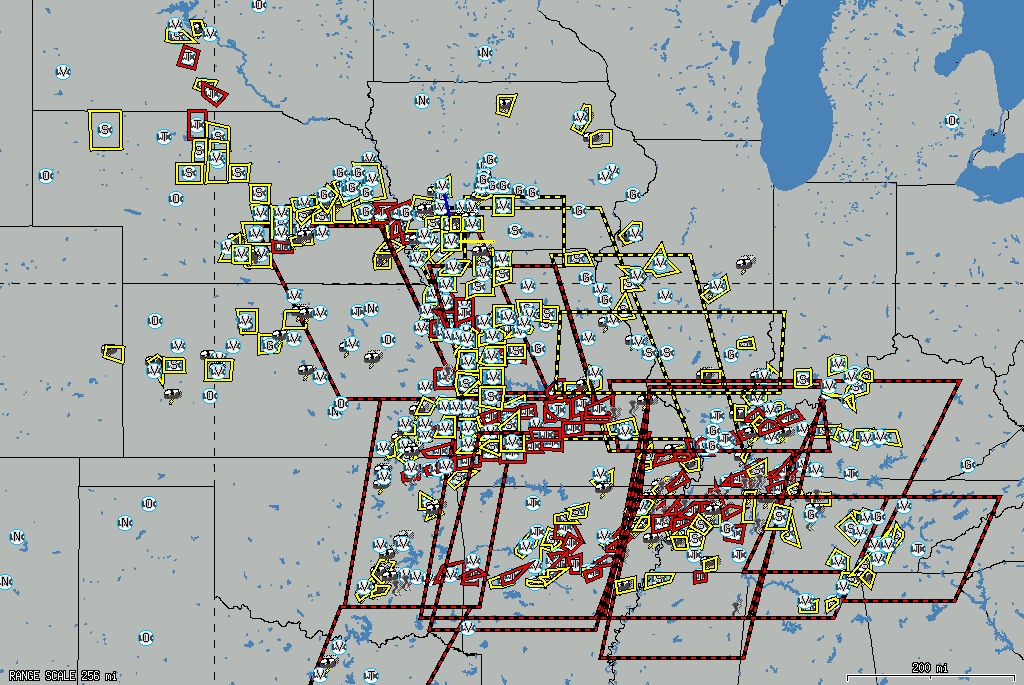 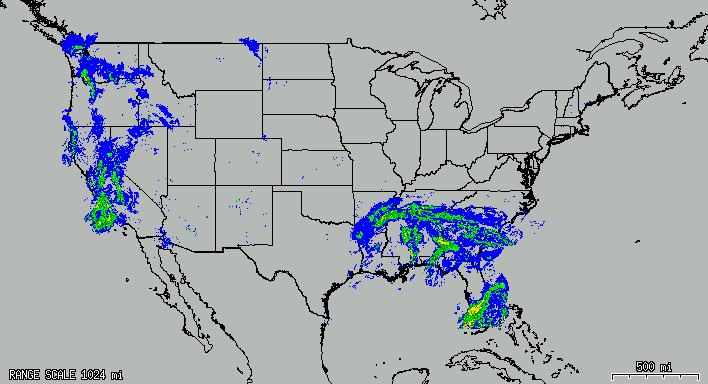 Requires: ImageMagick plus wget or libcurl.


Displaying the proper maps for the view and zoom level

Xastir knows the extents of each map in its index. If you select all maps of a certain type, Xastir will load only those that fit the current view. You may also select the zoom levels at which various maps will be used, and the layering of various maps in comparison to other maps. All of these techniques allow you to customize the map stackup to your liking. Using these features you can avoid loading detailed maps until you are zoomed in, drastically reducing map loading time. Set up the min/max zoom levels for each selected map in the Map->Map Chooser->Properties dialog: 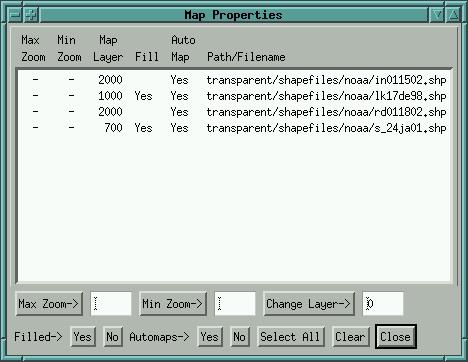 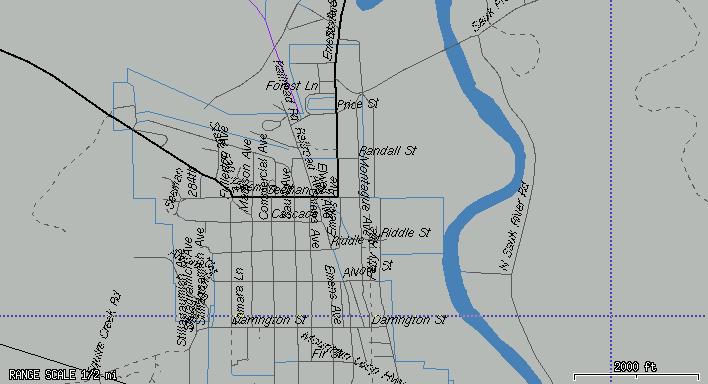 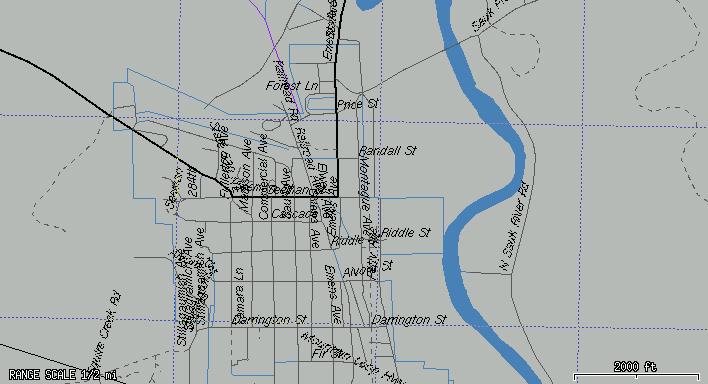 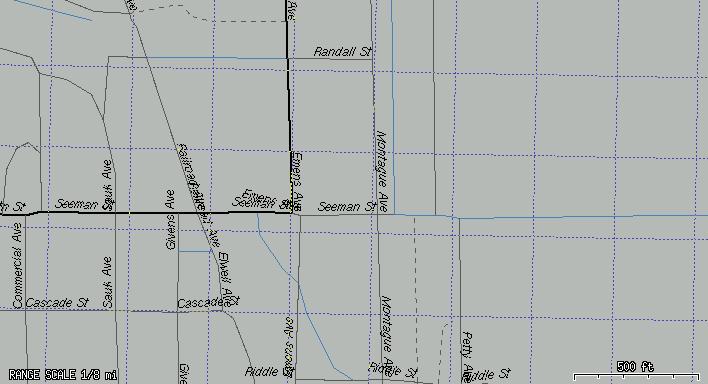 Requires: Nothing: Built-in to Xastir. Grids get more detailed automatically as you zoom in.

Useful for posting locations of teams, vehicles, clues, footprints, point last seen (PLS), last known position (LKP), helicopter/plane landing areas, incident command post (ICP), etc. You may choose whether to transmit these objects/items over the air via a togglebutton on the "Interface" menu.

An APRS symbol has been defined for the ICP (square with diagonal green/white fill). Other common symbols can be created using overlays:

Mouse right-click menu: Object/Item->Create, then choose the symbol and other parameters unique to the object. If no location is specified it will use the mouse click position to place the object. You can type in new coordinates or use the "Calc" button to input coordinates in UTM/MGRS, etc, and have the object placed there when you hit the "Create New Object" or "Create New Item" buttons. Put in a course/speed and the object will move dead-reckoning style along your map. 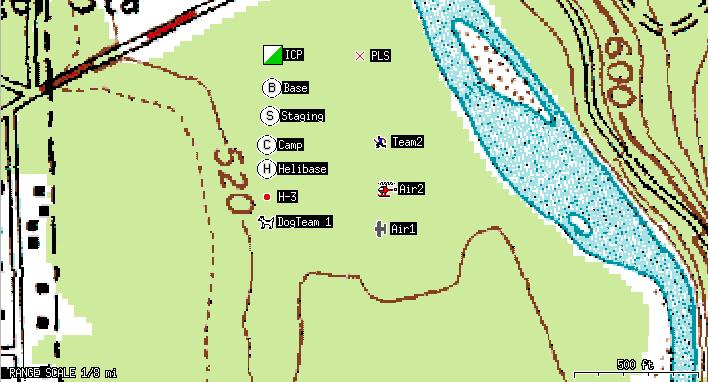 Mouse right-click menu: Object/Item->Create, then choose "Area Object". You can then create the various types of APRS Area objects. The sizing of these can be tricky as they're specified in lat/long increments. 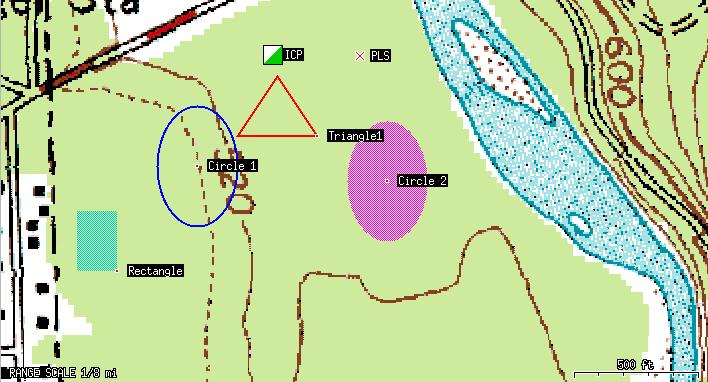 Mouse right-click menu: "Object/Item->Create", then choose "DF Object" and whether you're using an "Omni Antenna" or a "Beam Antenna". You can input other parameters based on these selections. The beam antenna selection will allow you to chose your beamwidth and the bearing. It'll then draw two lines emanating from the object's position, showing the beamwidth you selected. If you have more than one object on the screen, the intersection of the beams is the likely location of the transmitter. The "Omni Antenna" setting may be of less use to SAR, bu the basic idea is that you eliminate areas, or show likely areas, based upon who hears/doesn't hear the transmitter. Make sure to enable Station->Filter Display->Display DF Attributes in order to see the extra attributes that a DF object can display. The image here shows two DF objects each with 8 degree beamwidths. 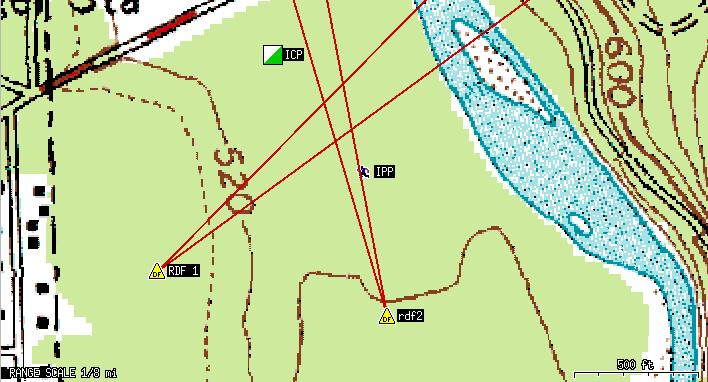 An image of "omni" DF'ing 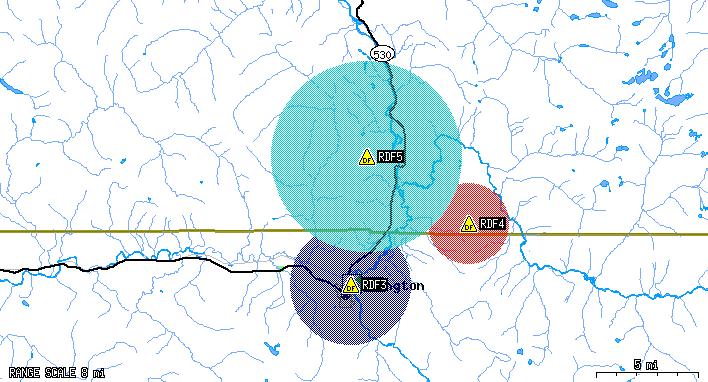 Xastir lets you drag an item to a new position, or type in a new position using any of several different coordinate systems. Click on the "Move" button at the top of the Xastir main window, then click on an object and drag it to its next position. A dialog will pop up with the new coordinates: Just click the "Modify Object" or "Modify Item" buttons to effect the move. You'll see a track line between the old and the new positions if you have "Display Trail" enabled. 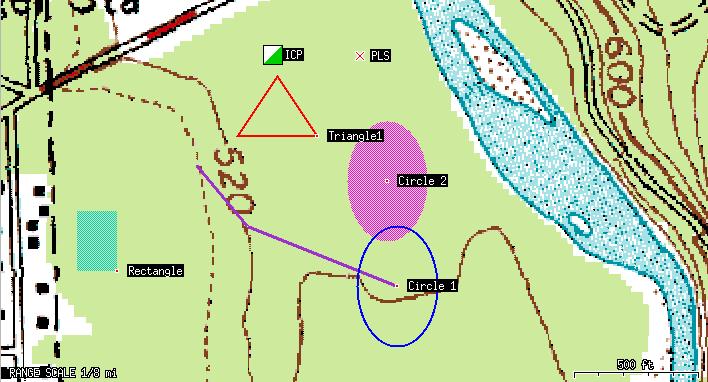 Taking over someone else's objects/items

Xastir allows you to take control over someone else's objects. Other APRS clients can do the same with your objects. Once someone takes over your object, Xastir will cease to transmit that object unless you again take over control of it. Taking over control involves either moving the object or changing some parameter of the object. Note that if you don't have transmit enabled, the remote station won't know you've taken their object over and their next transmission will cause them to take it back from you.

Useful for determining likely search areas. You can attach either one or two circles to an object and define the radius of each in miles. They show up as red circles around the object at the specified distances. If you need more than two circles, plot more than one object at the same location. Here we show circles at 0.2 and 0.5 miles radius from the initial planning point. 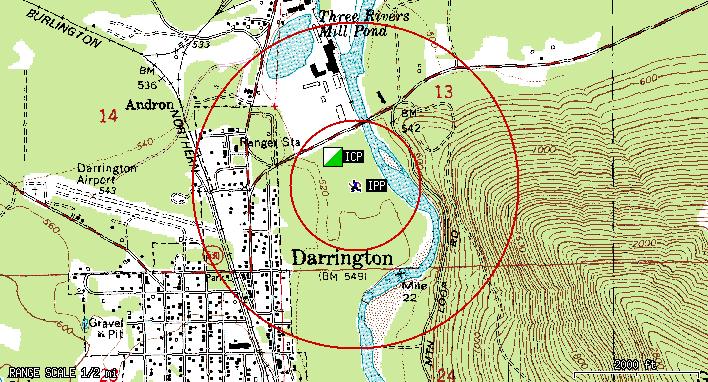 Xastir saves each owned object/item in a file, and reads that file on startup. This means that it is difficult to lose the objects in case of a power failure/restart of the computer.

Moving stations or object/items that have a speed/course entered will move along the map until another position is received or the speed/course are changed. This is called dead-reckoning, and gives a better indication of where the object may currently be. If Xastir is killed/restarted, any objects with a speed/course will start moving across the map from their initial location (be aware of that).

This is useful to delineate smaller search areas that an individual team can accomplish in 4 to 6 hours, and to measure the area enclosed. Here we draw two segments. The colors of the line segments change as they go over various map colors in order to make the line segments more visible. 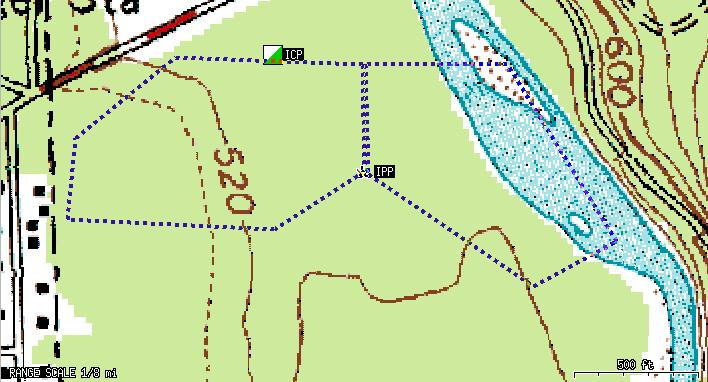 
Measuring distances/bearings on the screen

Click on the "Measure" button at the top of the window, then click-drag-release to determine distances and bearings. If you have English units selected, you'll get answers in miles/yards, else kilometers/meters. Select the units in "File->Configure->Enable English Units".

"Map->Coordinate Calculator" will bring up the calculator dialog. You can also bring it up from the "Configure->Station->Calc" button or the "Object/Item Create" right-mouse-click dialog. This dialog has three entry fields and some buttons at the bottom. Enter a coordinate using all three or just the right two input fields and press "Calculate". The output box will show coordinates in several different coordinate systems. If you brought this dialog up from a coordinate entry field in another dialog, pressing "Close" will cause the value to be entered into the calling dialog.

This allows creating actual Shapefile maps from station or object track data. Useful for documenting a search or overlaying the map onto other maps later. Create the maps via the mouse menu->Station Info->Store Track button.

This allows creating actual Shapefile maps from GPS data. The maps can then be overlaid on top of other maps in Xastir. The downloading process is designed to get the GPS back into the hands of field personnel as quickly as possible: When you initiate the download, it begins immediately. The operator may choose the color and filename for the file either during or after the download. In any case, as soon as the download is complete, the unit may be handed back, whether or not you've selected the color/filename yet. Here I've reduced the map intensity so the track stands out better: 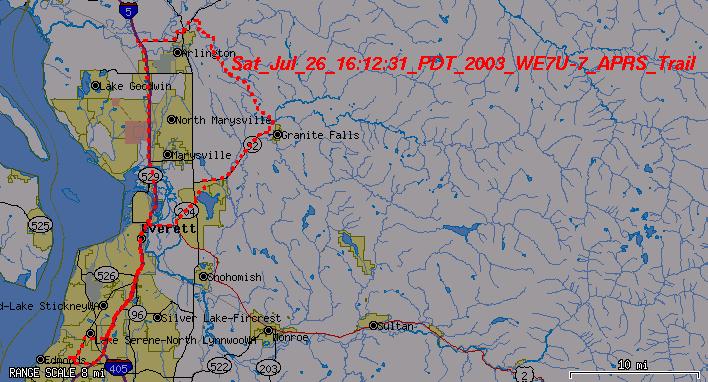 This feature, assuming that you've set up printing properly on the system to begin with, allows very fast printing of the map screen. It will automatically scale and rotate the image to best fit the printed page.
Requires: XPM or ImageMagick (to create postscript file), "gv" (for print preview), and proper printing set up on the machine.

Gives you a fast indication of distance_bearing from base to the mouse pointer location.


Requires: Nothing: Built-in to Xastir.

If GNIS files for the area are loaded, it's a quick way to find/goto an area on the map.
Requires: GNIS map files.

Fast way to return to particular locations/zoom-levels.
Requires: Nothing: Built-in to Xastir.

Can darken raster maps so that vector maps or symbols/tracks are more visible.
Requires: Nothing: Built-in to Xastir.